My Second Week at Anything Goes Lab 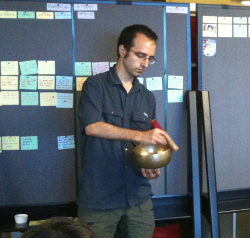 If there were a single lesson I would take from these 2 weeks it would be: don't be afraid of failure. We all know this, but putting it in practice is not easy. Fear has kept me from doing many things. How did I learn this time? I heard very smart people telling stories about their failures, and they were not embarrassed; they even laughed about it.

The most convincing was having Bill Warner telling how a New York editor rejected his book. Some of his ideas were inspired by Wayne Dyer's The Power of Intention and he gave him credit for it. The editor's answer was pretty close to if I wanted to read Wayne Dyer I'd buy a book by Wayne Dyer.

As a team, we also had our own dose of failure. Scott Kirsner, a writer for the Boston Globe, came to visit. When he compared us to Curves, I don't think he meant it as a compliment.

We invited 2 guests to have lunch and talk; they were Eric Peters and Desh Deshpande. Eric was CTO and technical co-founder of Avid Technology. It was interesting to hear how Eric and Bill created the co-flow that made Avid successful.

All of us have multiple intentions, and because we're humans, there aren't two people with the same intentions. It's like our DNA. 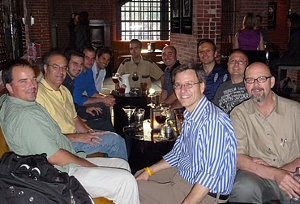 At the Liberty Bar

But the founder is not alone; there are co-founders and employees, all with intentions of their own. There's co-flow when the members of the team not only follow the primary intention, but also add-up to it. They amplify it. This is the most powerful concept in building a company from the heart.

It's essential to identify the primary intention very clearly and communicate it to every member of the company. This was one of the main goals during our first week at Anything Goes Lab.

Eric Peter's task was to create the technology to allow movie editors to use a computer. It was the 80's. They were still cutting celluloid to do their work. Bill asked Eric to create the hardware and software to display movies at 15 frames per second. Defining the target display refresh rate was a tricky decision. Make the number too low and the editors won't like the product or will buy a competitor. Make it too high and you'll run into technical difficulties, need more resources, and delay the release.

Eric accepted the requirement without arguing. Didn't say anything either when Bill asked is it ready? - which I assume happened countless times. He knew his people (the editors) better than Bill. He knew 15 wasn't enough to convince them to switch. When he got back to Bill with a working solution, it was capable of displaying 30 frames/second.

This is a good example of co-flow at work. It's also proof of the exceptional abilities of Eric Peters as an engineer. It gave Avid a huge advantage over the competition, today its yearly sales are over $600 million.

Desh (co-founder of Cascade Systems and Sycamore Networks) shared some of his stories as an entrepreneur. We have an audio recording of this session.

He agreed with most of our ideas when we discussed the principles of building a startup from the heart. He thinks using your head is an obstacle especially in the beginning. If you use your head you might never start a company. The first steps are irrational and come from the heart. But when things have started, the head can be useful too, for instance, recognizing that some approach you've been trying doesn't work. Follow your heart; use your head.

Among the teachings Desh shared with us, was one that made a big impression on me - something I already knew. But the clarity and conviction he used struck me: identify the good people early and never miss an opportunity to work with them. 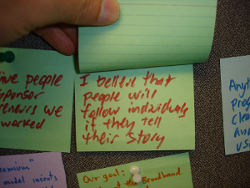 Working on the board

Some of you might be wondering what goal we achieved; what concrete deliverables we completed in these two weeks, I know it, because we asked ourselves the same question the last few days. We took the boards and put everything in a wiki. You're welcome to take a look and make comments. There are 26 of us, with our stories, our people, intentions, beliefs and inventions.

We've already started working on our startups and intend to be in touch and help each other through this journey. Who knows - in 5 years, if we're lucky, someone else will invite us to talk to a group of young entrepreneurs, tell them our story and how it all started at Anything Goes Lab.